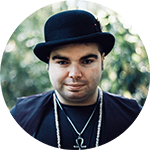 Dylan always had an attraction to mysticism. At 9 years old he learned how to read palms and at 13 he received his first tarot deck from his mother, and was entranced by their esoteric nature and history. He began to study the cards, and soon sought out other forms of divination: runes, tea-leaf reading, scrying boards, pendulums, and throwing bones. He sharpened his craft by giving readings to family and friends, and built on that foundation by attending classes in the Occult Arts in Los Angeles, New York, and New Orleans. His connection to mysticism and love for knowledge allowed him to study, explore, and dedicate himself to the art of Witchcraft, as well as Hoodoo, Root-work, and Shamanism. He is a practicing Witch and uses the craft to assist him in both his personal and professional life.

Born with Irish, German, and Native American blood, he attributes his spiritual gifts to his many ancestors who walk and work beside him, guiding him on his sacred journey. He has been reading professionally for over 10 years in both retail establishments and entertainment venues.

He considers a psychic reading to be a conversation between the client and the tools. He is an oracle in the purest sense; he conveys the information shown to him from the beyond to assist you in finding your path of least resistance.

A reading with Dylan will bring clarity to confusion, allowing you to see the answers you seek like never before.

I have never gone to the trouble to write a review but I had such an AMAZING reading from Dylan that I had to! His tarot reading was dead on!!! I had chills.

WOW….5 Stars to this guy! I’ve been getting readings from Dylan for the past three months now and I’m impressed every time. He’s super intricate and accurate. He not only reads what he sees in the cards, but helps you through the situation at hand and offers guidance on how to achieve what you want. He’s helped me through many difficult situations and his predictions have been super accurate.

Dylan-Awesome reader, very insightful and accurate! Dylan is a talented and gives alot of a information in a 30 min reading. He has great energy and most important very understanding when is comes to sensitive subjects. He is accurate in time frames and his passion for his gift really shows and is also very intuitive. He is one of my top readers and will returning for more future readings!

THIS READER DOES NOT OFFER SKYPE SESSIONS.
The Spiritual Owl is now offering her readings at Mystic Journey Gallery located at:

BOOK A READING
If you are interested in booking this reader for an off site event, please send an email to: info@MysticJourneyBookstore.com