An Empowering Astrology Guide for 2020
HOSTED BY 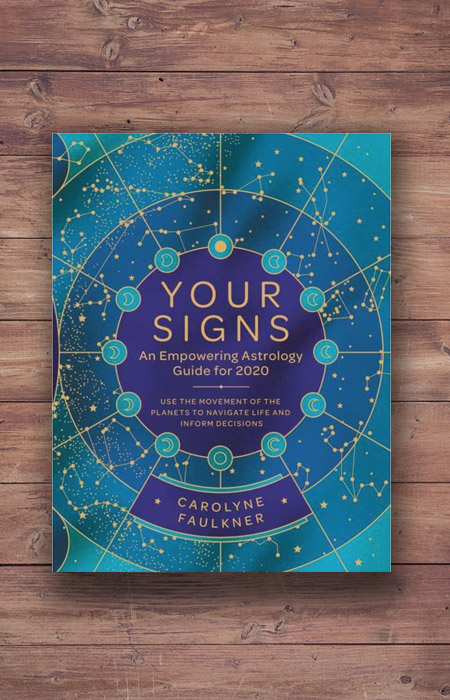 Astrology is the most powerful language on Earth.  It helps us to translate universal energy, energy that exists within us all and is star sent.  When translated effectively, it has the capability to unite us and to illuminate deeper paths and nourish our spiritually thirsty souls. The movement of the stars and changing positions of the zodiac make an impact, both on a personal and a collective level.  They affect how we deal with family, friends and colleagues, as well as how we manage our thoughts, feelings and behaviors.

This first-of-its kind astro-journal will offer simple yet powerful daily, weekly and monthly exercises and tips to navigate the changing tides of daily life. The journal covers the year 2020 and will look ahead to the movements of the planets for the whole year, including monthly and weekly forecasts plus ‘homework’ exercises.  The journal will teach how to understand the meaning of the forecasts in clear bite-sized tutorials and will recommend appropriate activities and tasks according to what is happening that week with the planets and the moons.
‍

The purpose of the journal is to teach how dynamic astrology and a deeper connection to the world can help to practice self-reflection and positive change.

Dubbed ‘Britain’s coolest astrologer’ by the press, Carolyne Faulkner is a game-changing life-coach. Her highly-acclaimed method ‘Dynamic Astrology’ (D.A.) shows how ancient wisdom and patterns in the stars can shine a torch on the hows and whys of human behavior.

‘Nobody’s future is written in the stars, the future is ours to create.’ - Carolyne

Dynamic Astrology breaks away from old style magazine horoscopes and fortune telling. Instead of vague predictions about personality and fate, it places people right at the centre of their own decision-making.

Carolyne has discovered how to use the teachings and probabilities of astrology to influence and benefit our everyday lives. This is all done in her own cheeky yet compassionate down-to-earth style, where she’s never afraid to say ‘what’s what’.

In 2006, Carolyne began studying meditation and embarked upon a journey to the far-flung corners of the globe on a search for answers to life’s deeper questions. Extensive soul-searching led her to Astrology, which soon became her second language.

Carolyne also discovered a love for Tibetan Buddhism and found her revered teachers who directed her to become the coach she is today: fused with her deep knowledge of astrologic patterns and stars, birth charts, and ancient wisdom.

A decade on and Carolyne had a mission: to make astrology cool, edgy and accessible by designing a version of her unique method for everyone to use, in an easy-to-understand way.

D.A. was created as a life coaching method based on an algorithm of human behavior, a unique compendium of stars, and their impact on humans and the energies around them…and she wasn’t wrong.

After meeting Nick Jones, founder of Soho House, she became the club’s in-house astrologer and regularly holds talks and events in their houses around the world. She set up a clinic at Harrods’ Urban Retreat and has been featured in numerous publications including Vogue, Grazia and Harper’s Bazaar.

As well as hosting elite events for high-profile brands including Net-A-Porter, she has over 200 influential global clients attracted by her wise and insightful advice, and enchanted by her total irreverence toward status and celebrity.

Born to a spiritual mother and casino entrepreneur father in Swansea, South Wales, Carolyne ran wild and free. She had her own mini-zoo, which included two horses and through her love of animals she became an advocate for vegetarianism and anti-fur.

Carolyne ‘launched’ her first magazine at the age of ten and studied at drama school. She began producing her own plays for the whole school and was recognised early on as an inspirational free-thinking visionary and was soon picked to be a creative in the media industry.

Her resourcefulness and ability to actualise ideas and develop simple solutions for both complex and daily problems helped her achieve success and respect. She also managed to build a steady client base of ‘A-list’ VIPs, entrepreneurs and high-flying companies worldwide.

Her passion to give back, her natural empathy and integrity together with a stubborn refusal to accept the status quo turned her into the ‘go-to life coach for those in the know.’ - (InStyle)