A Participatory Prayer for Healing and Blessing
HOSTED BY 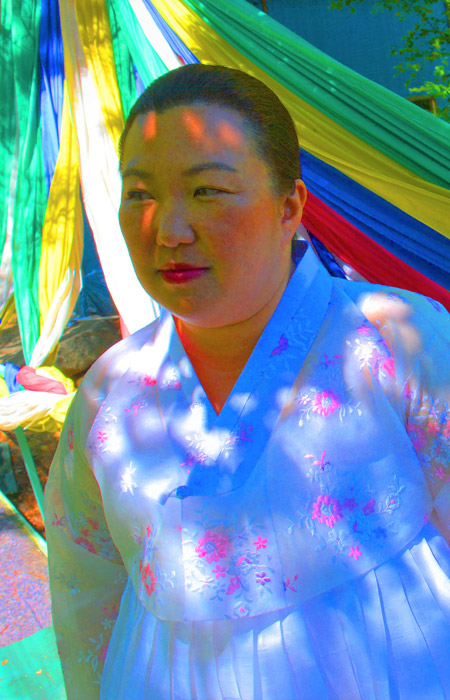 Shamanism is an ancient healing tradition practiced by people all around the world.  The word "shaman" originates from the Tungus people in Siberia and refers to the spiritual and ceremonial leaders among indigenous cultures worldwide.  In today’s society, there is a diversity of shamanic practices due to globalization and modernization.

Helena will lead a shamanic ceremony based on the traditional practices of Korean shamanism called “Muism.”  The ceremony will involve audience participation through the creation of prayer candles to be offered on the altar (candles will be provided).

Korean shamans are called “Mudang,” and they act as the intermediaries between the human world and spirit realms.  During her initiation, Helena received multiple spirits, and one of the main deities in her pantheon is a goddess known as the “Heavenly Maiden,” who brings forth healing through beauty.  This ceremony can be particularly helpful to those who are artists, musicians, writers, and performers.  Specific prayers for success in the arts and beauty and entertainment industries can be offered up during the ceremony.

Ceremony will be followed by a talk where Helena will discuss her personal journey of becoming a healer and her research on the lives of contemporary Western shamanic practitioners.

Helena Soholm is a Seattle-based psychotherapist and a Korean shaman (Mudang).  Helena’s research interests are in the areas of contemporary forms of shamanism, cultural identity, spirituality, and the arts.  Helena received her PhD in clinical psychology in 2019.  She also holds master’s degrees in Theological Studies from Harvard University and Existential-Phenomenological Psychology from Seattle University.  Her undergraduate studies were completed at Smith College in the fields of Psychology and Religion.  As a practitioner and scholar of shamanism, Helena’s work focuses on spiritual development and identity, including both the clearing and honoring of ancestral energy.